The first news about Andrea Mantegna goes back to when he was an apprentice at the Paduan workshop of Francesco Squarcione. In 1448 he emancipated himself from the master, to whom he was bound by very rigid contractual terms. He assumed for the first time an autonomous commitment, shared with Nicolò Pizzolo: the decoration of the Ovetari family chapel in the church of the Eremitani of Padua.

The church of the Eremitani

Following the death of Pizzolo in 1453, Andrea Mantegna completed the entire work (perhaps around 1457), which includes the “Stories of the saints James and Christopher” and the “Assumption of the Virgin” on the back wall, frescos only partially survived after the bombing of 1944. In the same years, the painter created the “San Lucas Altarpiece” for the Abbey of Santa Giustina (Milan, Pinacoteca di Brera), and the “Saint Eufemia” dated 1454 (Naples, National Museum of Capodimonte).

Andrea Mantegna and the Bellini family

In 1453 Andrea marries Nicolosia, daughter of Jacopo and sister of Giovanni Bellini, thus binding to the main Venetian painting workshop of the time in the Veneto region. Around 1457 he performed the triptych altarpiece of the Basilica di San Zeno, the main church of Verona. In 1459, after repeated pressure by Duke Ludovico Gonzaga, Andrea Mantegna moved to Mantua, where he assumed the prestigious position of the official painter of the court.

At the court of the Gonzaga

Within charge of the most varied tasks, the master realizes here some of his fundamental works: in addition to the “Death of the Virgin” (Madrid, Museo del Prado) and the tables today at the Uffizi, perhaps destined for the duke’s chapel in the castle, he works until 1474 to the frescoes of the “Camera degli sposi” in the ducal palace.

His journeys in Tuscany and in Rome

During the Mantuan years, he travels to Florence and Pisa (1467 and 1468), and in 1489 he stays in Rome to decorate a chapel for Pope Innocent VIII, destroyed in the eighteenth century. In 1486 he began working for the Gonzaga in the cycle of paintings on canvas depicting the “Triumph of Caesar” finished around 1495 (London, Royal Collection at Hampton Court Palace). Mantegna retains his position at court with the new dukes, Francesco Gonzaga and his wife Isabella d’Este, for whom he paints in 1496 the “Madonna della Vittoria” (Paris, Louvre Museum) and, the following year, the “Trivulzio Madonna” (Milan, Sforza Castle Pinacoteca).

For one of the Duchess room, Mantegna realizes in 1497 the canvas “Parnassus” and “Triumph of the Virtues” (1502), both in Paris Louvre Museum.

Some paintings of Andrea Mantegna 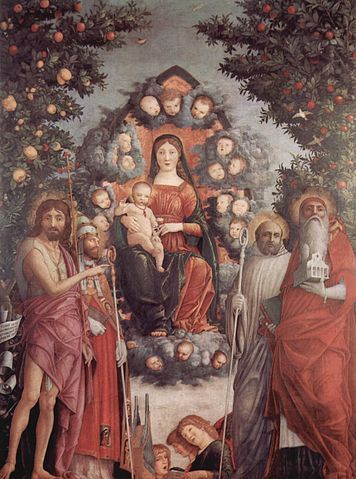 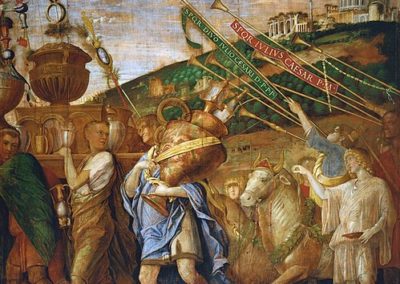 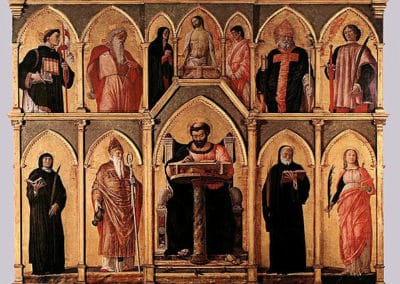 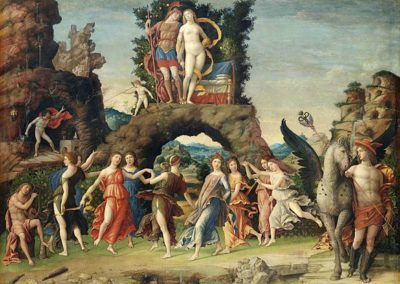 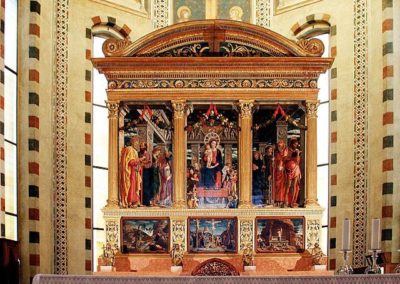 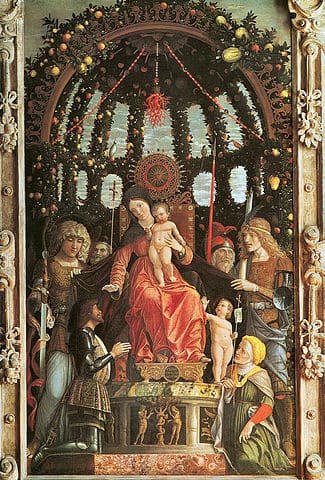 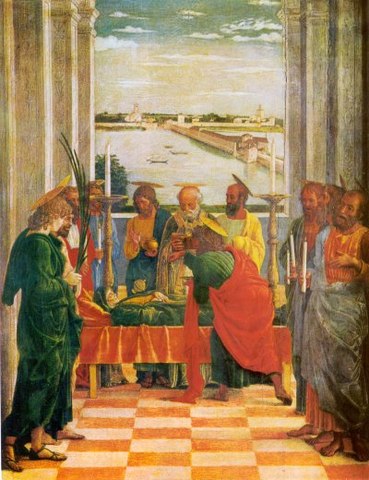