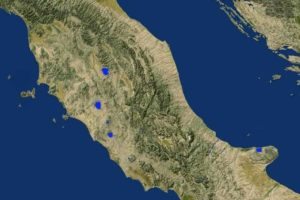 The Central area of Italy consists of 4 regions and borders Emilia Romagna and Liguria Regions to the north. Hence to the south, we have Abruzzo, Molise, and Campania regions.

To the east, it is bordered by the Adriatic Sea and to the west by the Tyrrhenian Sea.

The regions of this part of Italy are:

The capital of each region are Florence in Tuscany, Perugia in Umbria, Ancona in The Marches and Rome in Latium.

The morphological conformation of this territory is varied: basically hilly, it is crossed by the Apennines from north to south and it is bathed on the northwest by the Ligurian Sea, on the west by the Tyrrhenian Sea and on the east by the Adriatic Sea.

The main rivers of this part of the territory are the Arno and the Tiber. The most important lakes are the Trasimeno and Lake Bolsena.

The coastline of the central area is quite regular and it features many long sandy beaches.