It is likely that Venice inherited the glass art from Byzantium. Or maybe even directly from Ravenna, together with the art of mosaic. For some historians of the past, Venetian glass art would have arisen almost simultaneously with the installation of the first immigrants on the mainland. Others remember how centers such as Altino and Torcello were flourishing in Roman times, recalling the mastery of the Romans in working glass. And with the invasion of the barbarians, the transplant of the glass industry would have occurred from the lagoon hinterland to the Rialto islands.

Glass industries in the mainland

However, these suggestive hypotheses lack a documentary proof. As well, they would be contradicted by the fact that, at least in the period indicated, glass industries apparently existed in the mainland areas abandoned by fugitives who took refuge on the islands of the lagoon.

Benedictine in the lagoon of Venice

On the other hand, convincing arguments and precise documentation prove that Benedictine glass teaching has reached the lagoon. This was codified in the known “schedule” of the monk Theophilus Presbyter, through one of the many religious order monasteries that in the ninth century arise on the islands of the estuary. And how a similar secular production of blown glass called fiole or vials has come from the monastic industry. As well as bottles and other hollow glass intended for utilitarian purposes.

The oldest document showing the name of a Venetian “fiolario” or glass-maker is dated December 20, 982, in Rialto. This is a donation act of San Giorgio Island to the Benedictine monks by the Doge Tribuno Memmo (Menio). In this document is mentioned a certain Domenico “phiolarius” who had a certain authority since his name appears next to that of the Doge in the legacy certificate.

From monastic order to secular industry

This presence suggests the hypothesis of an early relationship between the Benedictines and the first Venetian glass-makers. There is a singular coincidence of finding the names of the first Venetian glass-makers just in donations to the Benedictine monks. And this coincidence is connected with the great experience already acquired by these friars in glass art for some time. It is therefore no wonder that Venice, where there were probably ovens to manufacture mosaic glazes according to the influences of Ravenna, under the pressure of new contacts with glass-makers of the monastic order, offered a suitable terrain for the growth of a secular industry of blown glass.

It can also be thought that since the thirteenth century the most frequent relations with the Orient, where the glass-making technique of the Islamic world was very advanced, have contributed to broaden the knowledge of the Venetian craftsmen.

In the thirteenth century most of the glass-makers of the Serenissima already resided in Murano, but many other also operated in Venice. It was in 1291 that the Great Council decreed to move all the furnaces to the island of Murano due to numerous cases of fire that occurred in the town. According to the custom of the time, entire neighborhoods had houses built in wood risking devastating fires caused by the furnaces.

Murano was particularly favorable to this concentration, given the scarce presence of dwelling houses. From that moment in Venice only the activity of small kilns that produced the so-called verixelli was allowed, that is the small glass-works. These furnaces, however, had to isolate themselves from the houses by at least five feet all around in order to prevent the spread of any fires.

Murano glass in the world

Starting from the fourteenth century, Murano glass and its skilled craftsmen is celebrated everywhere by advancing on the path of ever more shining and unchallenged glory. 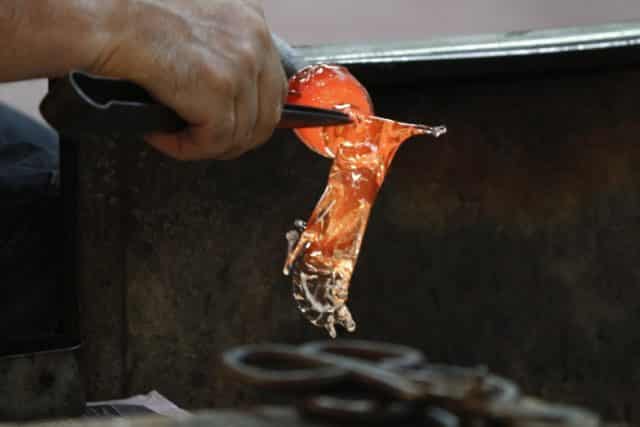