A vast triangle between the plain and the Adriatic Sea

Po Delta of Emilia Romagna is the vast triangle between the plain and the Adriatic Sea, in the Northeast of Italy. It’s the result of the sediments deposited along thousands of years by the southernmost branches of the river and its Alps and Apennines tributaries. Hence, It extends as a fan in the east of Ferrara. Furthermore, Bordered to the north by the Po of Goro and to the east from the coast of Ferrara and Ravenna. The Delta is a landscape where the land and the water mingle, blend and swap place continually.

An environment in constant change

They are lands of water, the result of a natural landfill and, more often, of deliberate changes. Like also waters of land, the swamps where the river comes to a standstill. Furthermore, shallow lagoons where the sea remains imprisoned and evaporates. The result is an environment that changes always. In conclusion, the Delta as we see it today is deeply different from what it was yesterday. Hence tomorrow it will be different yet. As a result, this evolution takes place much faster than that of other landscapes.

The vastness of the Po Delta

Already talking about the Delta of the Emilia Romagna is reductive and somewhat arbitrary. The so-called Delta of Ferrara and Ravenna is, first of all, just a portion. Because it’s the southernmost of the great Delta formation of the river Po. On the other hand, it remains the memory of something that no longer exists. Because it embraces a territory that reaches up to the saltpan of Cervia. That is a result of the times (about 2000 years ago) in which the main branch of the Po flowed into the sea just north of the present Ravenna.

The whole story of the Po Delta, on the other hand, is eventful. Just 3000 years ago, the great triangle stretching out into the sea between Chioggia and the Lidi Ferraresi did not exist. In fact, the coastline was about fifteen miles further west. To reach the sea, the Po had to open the way through the huge amount of sediments it carried, in the flat valley North of Italy. As a result, this situation created new distributaries continuously.

Sometimes, titanic floods broken through the natural banks and reshuffled the cards deeply. They turned upside down the grid of the rivers and the mosaic of the waters and the outlying lands. At one point, in this grandiose process, the man starts to compete with nature. In fact, he embanks and diverts the rivers, the ponds dried up and transformed into cultivable lands. As well as the swamps and the lagoons modeled to exploit the fish and salt resources.

Venice and the new flow of the Po

As a result, It is more than a slow but constant process and sometimes marked by radical events. Like when in 1604, a serious threat affects the maritime power interests of Venice. In fact, the sediments, carried by the Po, were silting up the lagoon. As a result, the Venetians built the famous “cut of Porto Viro”, a channel that diverted the main Po river to the south. Furthermore, they closed all the river distributaries going north. In conclusion, an intervention that deeply transformed the hydrography of the entire Delta.

Another deep transformation factor was the “great reclamation”. Hence a change that affected the eastern part of the Po Valley. As a result,  in Emilia, it had its center, first in the great reclamation of the area of Ferrara at the end of the nineteenth century. And as follow, in that of the Mezzano valley, between 1964 and 1984. It was an epic event, thanks to the invention of the steam engine, applied to the powerful water pumps.

As a result, we find a process of the agrarian estate reformation. In particular, the need to give vent to the great social tensions by creating employment, and also transforming landless farm labourers into small owners. As well as the health safeguard linked to the fight against endemic and virulent malaria in these immense swamps. Once again the face of the delta emerged deeply modified.

In conclusion, the transformation is a mosaic of almost oppressive uniformity. Squared by the perpendicular lines of the drainage channels. As well as the agriculture roads and the plant rows. Furthermore, the houses of the reformation and the hydraulic works marked it. As a result, they relegated to the margins the delta of the ponds, the meanders, the canebrake, and the hydrophilic forests. With the exception of the fishing valleys and the hunting reserves.

The Po Delta, an ecosystem to save

Today, however, the establishment of the Regional Park restores the dignity to the environment. In fact, it recognizes the present and the future value of the backwater and the swamps, as their plants and their animals. As a result, the European Union supports the projects to rebuild flooded meadows and to recreate wetlands. Maybe, even in those lands of reclamation that are desertifying. For sure, due to the excess fertilizer and for the salinization of the aquifers. 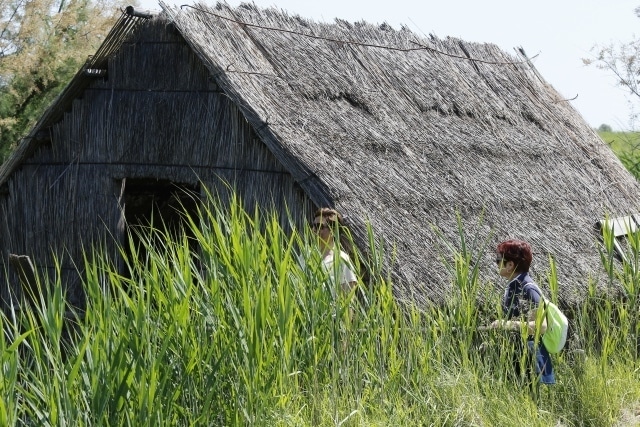