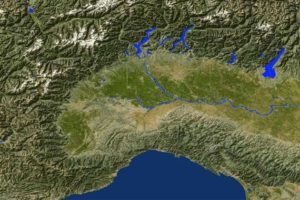 The Northwestern area of Italy consists of 4 regions and borders in the north and west with Switzerland and France. These boundaries are naturally drawn by the range of the Alpe mountains.

To the south, it is bordered by the Ligurian Sea and to the east by the regions of Tuscany, Emilia Romagna, Veneto and Trentino Alto Adige.

The regions of the northwestern area of Italy are:

The capital of each region are Milan in Lombardy, Turin in Piedmont, Aosta in Aosta Valley and Genoa in Liguria.

The morphological conformation of this area is varied: in the north and west side, there are the Alpes, in the south there are the Apennine mountains ending in the Ligurian sea. These mountains encircle a vast plain that extends over the Adriatic Sea, also called the Po valley.

In the northwestern region of Italy, we can also find the most important italian lakes resorts that are the western part of the Garda lake (Benaco), the Iseo lake (Sebino), lake Como (Lario), lake Maggiore (Verbano) and lake Orta.