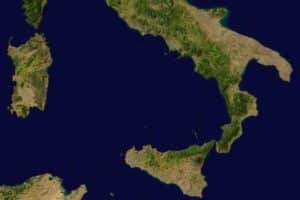 The regions of the southern area of Italy are:

The capital of each region are L’Aquila in Abruzzo, Campobasso in Molise, Naples in Campania, Bari in Apulia, Potenza in Basilicata and Catanzaro in Calabria.

The morphological conformation of the southern area of Italy is varied: its territory is mainly hilly and mountainous, extended plateaus are located in Apulia and Calabria regions. It is crossed by the Apennines from north to south and the highest peak is the Gran Sasso of Italy (2,912 m).

The southern Italy coastline is different considering its seas: the coast of the Adriatic sea is mainly sandy, interrupted only by the pronounced spur of Monte Gargano. The coastline along the Ionian Sea and the Tyrrhenian Sea is distinguished mainly by jagged areas, mostly high, rocky and steep with some sandy cove.