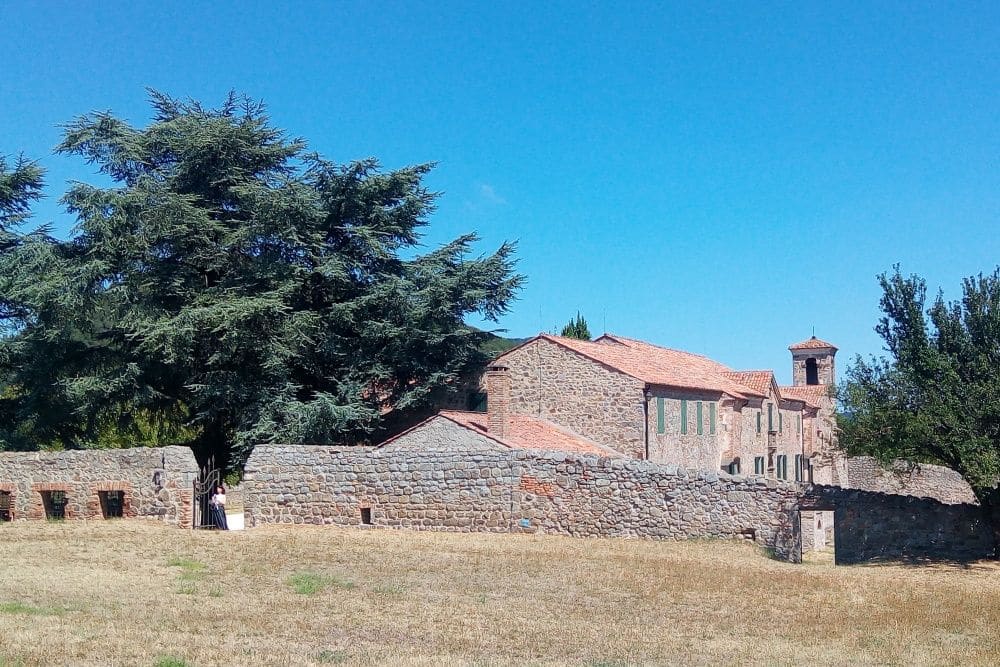 The Euganean hills, site of Hermits and monasteries

In the northeastern of Italy, there is a mystic area full of charm. And I talk about the Euganean Hills, a landscape dotted with churches, hermitages, and monasteries. In the Veneto region, this volcanic origin area is part of the province of Padua. Hence, in this post, I will write about the Blessed Beatrice I d’Este. Beatrice descended from the illustrious Este family, who, before moving into Ferrara, had rule over Este and part of the Paduan territory.

Villa Beatrice d’Este takes its name from the noblewoman and Benedictine nun lived in this place in the first half of the 13th century. Beatrice I d’Este was born at the beginning of the last decade of the twelfth century (1191 or perhaps 1192). Her parents were the Marquis Azzo VI and his second wife Sofia of Savoy. She spent her youthful years in the castles of Este and Calaone. With the brother-in-laws Aldobrandino, born of the first marriage of his father, and Azzo (the future Azzo VII). As well as with Constance, born of the Marquis’s third and last marriage with Alisia of Antioch. Beatrice knew the leisures and privileges of the court life. Also the troubadours of that time celebrated her for her virtues and beauty.

The war between Guelphs and Ghibellines

However, the first war among Guelphs and Ghibellines in the Veneto region upsets her serene life. An event that led to her father’s premature death. In fact, the troops loyal to the Emperor defeated him in 1212 in Pontalto (Vicenza). A few months later the family undergoes a siege. Hence, the army formed by the Paduans, the Vicentines, and from the town of Bassano caused the humiliating surrender of Este. Worth a note, the young Ezzelino II da Romano commanded this army. As follow, the elder brother of Beatrice I d’Este, Aldobrandino, that succeeded his father, was killed (perhaps poisoned) in 1215. In the same year, her sister Constance died. Hence, the Florentine bankers took in hostage her step-brother Azzo, that was underage, until the following year. Because the family was indebted to them.

It was also after these painful events that Beatrice I d’Este matured the choice of a religious life. First of all, the detachment from the court life took place gradually. Till the time when the noblewoman moved to the Benedictine monastery of Santa Margherita on the Mount Salarola (Calaone). For sure, with the help of Giordano Forzatè, the prior of St Benedict of Padua and the future bishop of the city. As well as Alberto, the prior of the monastery of St John the Evangelist in the town of Montericco.  Hence, Beatrice d’Este stayed at Salarola for a year and a half (1220-1221) without wearing a religious dress. Perhaps to escape the foreseeable reactions of the family. Because her choice could cancel a possible marriage with the Marquis Guglielmo Malaspina. 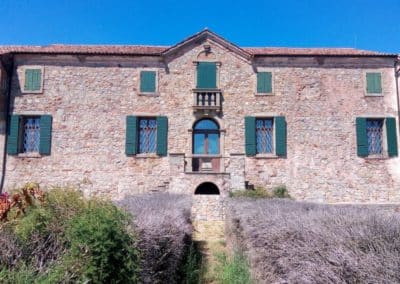 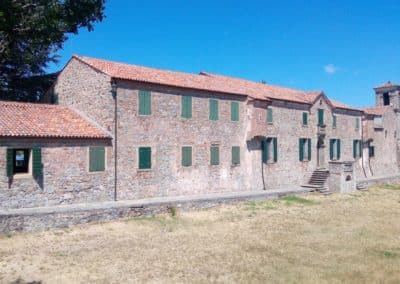 Villa Beatrice I d’Este back side 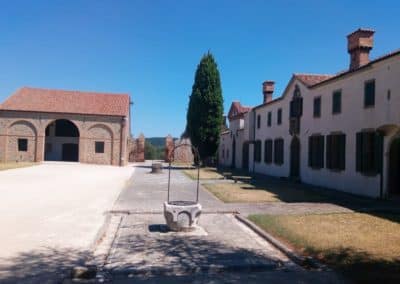 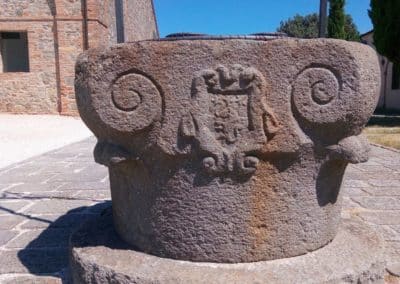 Letter to the Pontiff

There is a mention of the father’s wedding gift project in the letter addressed to Pope Innocent III. In which Beatrice d’Este cries the death of her father. It seems that the religious vocation of Beatrice born from a first spiritual crisis due to the parent’s death. The response of the Pontiff to the woman is a reference to ponderation and prudence. So this would explain the delay of several years with which Beatrice decided to leave the court.

Hence after the reconciliation with her family, Beatrice obtained from the bishop of Padua the monastery of St John the Baptist on the Mount Gemola. Worth a note, a place abandoned for a long time and ceded to the Diocese in 1221. Most of all, here Beatrice founded a new female community that adhered to the Rule of St Benedict. Hence to this purpose, she destined her assets to rebuild the monastic building and the church.

The foundation of the monastery

The transfer of Beatrice to Gemola took place with some solemnity. In addition to Forzatè, there was the Prior of Montericco. As well as the abbess of the monastery on Salarola, and the stepmother Alisia. Like also the wife of Azzo VII, Giovanna di Puglia. Worth a note, Giovanna became the new inspiration muse of the troubadours. For sure after the departure of Beatrice from the court of Calaone.

Beatrice I d’Este and the noblewomen

As a result, she took the vows and founded the community. Hence this young nun attracted with her fame and her example a dozen other noblewomen who joined her. Among these is the Blessed Giuliana of Counts of Collalto (now buried in a church of the island of Giudecca in Venice). As well as Maria Enselmini, of the noble Paduan family to which Blessed Elena Enselmini belonged. A letter from 1224 that some vassals addressed to her attested her presence in the monastery.

The death of Beatrice

Hence Beatrice and her companions chose a hard life of penance, prayer, fasting, and poverty. Seems that the conditions of such an austere life, in a strict enclosure, undermined the health of Beatrice. She got the tuberculosis disease after a few years. As a result, she died on Mount Gemola at the age of 34, on May 10, 1226. Hence, they laid her in a sarcophagus in the ancient sacristy of the claustral church. Where is now the small church annexed to the Villa. Therefore, the remains stayed on Mount Gemola until the closing of the monastery. Which took place after the bishop order in 1578. The nuns moved to the monastery of Santa Sofia in Padua. And the sarcophagus of Beatrice took place to the adjacent church, where it remained for almost four centuries.

The return of the Blessed to Este

In May 1957, the city of Este welcomed the long-awaited return of the Blessed. Worth a note, Este was the town of birth of Beatrice I. Conserved in a crystal casket, the body today is visible on an altar within the Este Cathedral. 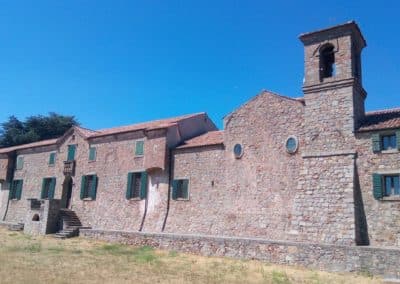 Beatrice d’Este monastery back side 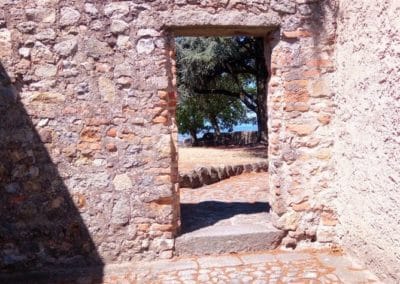 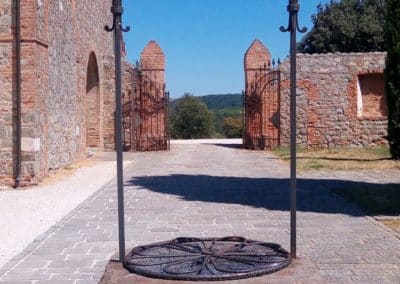 Beatrice I d’Este monastery – the well 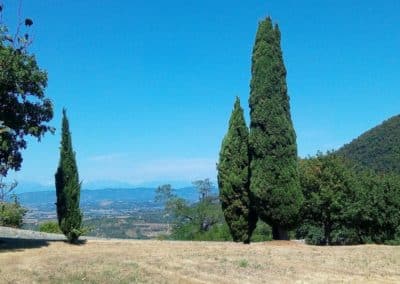 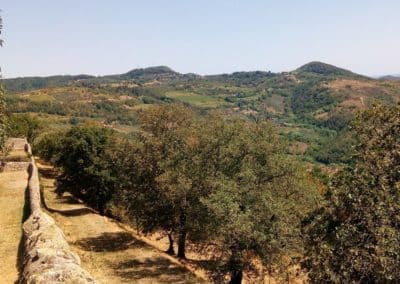 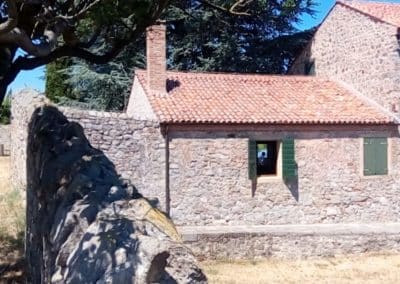 Monastery Beatrice I d’Este side building