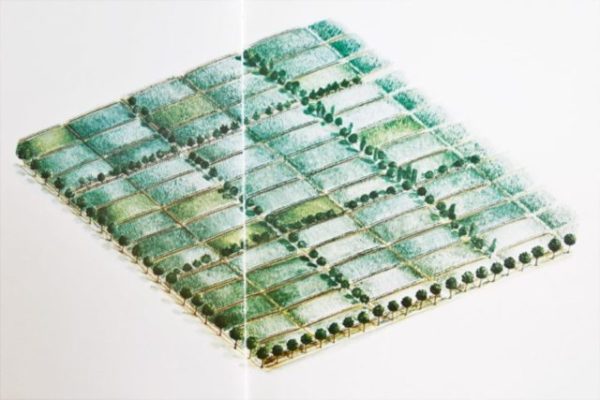 Roman Empire Centuriation, what it is and how was the utilization management? Well, the land is one of the most important “monuments” of the Roman period. Hence the division of the land into regular grids is recognizable in the countryside. And it bears witness to the first management scheme of the land over vast areas of the Po Plain, north of Italy.

The man draws a land that looks like a sort of chess board. Just looking at aerial photographs we perceive the scale. These views from above are also the only way we have to see lots of other buried signs. For sure in those areas that the environment and the hydrographic changes in the Medieval period affected.

The division of the land into grids is the centuriation (delimited by the centuriae), and square blocks characterized it. Therefore, the modular grids provided a useful tool not just for the distribution of the fields. But also for the colonization, and for the assignment of the lands to the soldiers that will be retired. As well as for the defense of the territory with the creation of a dense network of man made waterways used for irrigation and drainage of the fields. This model of land management played a key role in the process of the Roman expansion. In fact, it characterized the agriculture lands of the conquered territories.

The Cardo Maximus and the Decumanus Maximus

First of all, the Roman Empire centuriation was laid down along the axes of the two main roads. The Cardo Maximus and the Decumanus Maximus. The centuria is the module of the land division. So called because it was made up of one hundred small pieces, each of which known as heredium. There was also a further subdivision of the heredium into the actus quadratus and the iugerum. A square centuria was twenty actus long (710 meters). Hence it is about fifty hectares. As a result, clear traces of centuria are in a lot of places of the Roman Empire. Also outside the peninsula of Italy, some examples are in the Rhone valley and North Africa.

The typical scheme of a Roman centuriation

The Romans adopted many systems to set up a stable structure for the agriculture lands, as well as in the urban areas. Hence the schemes and the varieties of the settings depended on the economic and legal reasons in relation to the different periods and places where they were made. The scheme of the Roman Empire centuriation adopted in the north of Italy is the classic and widespread “ager centuriatus“.

First of all, they found the center of the city (“Umbelicus“), and they traced two perpendicular axes from it. In the detail, the first from east to the west direction called Decumanus Maximus. As the second from south to the north direction called the Cardo Maximus. So delimited the town, these two main roads continued through the surrounding territory. Hence they passed the four gates built on the walls of the town itself. As follow, the land surveyor stood in the “Umbelicus” of the town. Hence facing the west, he called ultra (hereafter) the part of the territory he had in front. Citra (herebefore) the part he had behind him. Dextra what was on his right and finally Sinistra what was on his left.

After that, they traced the secondaries Cardo and Decumanus on both sides of the two main axes. Also called limites quintarii, they were at an interval of 100 actus (about 3,5 km). And they divided the territory into square surfaces called saltus. Furthermore, they added other parallel lines to the road network. Always on the secondaries Cardo and Decumanus already drew. Hence these new lines were at a distance of 20 actus (710,40 m). As a result, they divided the territory into square areas, called centuria. The Decumanus Maximus was normally 40 feet wide (11,84 m), and the Cardo Maximus 20 feet (5,92 m). Furthermore, the limites quintarii were 12 feet (3,55 m) and the remaining roads 8 feet (2,37 m).

The subdivision of the Centuria

It is just at the end of the work on the road network that the real plot of the land will start. Therefore, they divided each Centuria in parallel lines along the cardines and the decumani. On a distance to each other of 2 actus (71,04 m). These bordered the square sections called Heredia with an area of about 0,5 hectares. In conclusion, in the Centuria we could find 100 Heredia (Centuria = centum Heredia). There is also a subdivision of each “Heredium” in two part, following the south-north way. In conclusion, these lines delimited the smaller ground unit, the jugerum. From jugum, amount of soil that could be plowed in one day by a pair of oxen. Hence that is the primitive Roman field, with an area of 2523 square meters.

The scheme of the Roman Empire centuriation just described may appear too rigid and abstract. But it answered, in a nearly perfect way, to a series of eminent practical order needs. Both politic and strategic, as well as agriculture and social profiles. And also under the administrative and fiscal ones.

The Via Emilia, Decumanus Maximus

Now, a Decumanus Maximus is one of the most important roads in the North of Italy. As a result, the road is the Via Emilia, and the region is Emilia Romagna. In fact, this main road goes from the town of Rimini to Piacenza. Hence it describes a straight line that goes from East to West. And also, on the Via Emilia, the Romans founded some important art cities of the region. With Rimini, we have Forlì Cesena, Imola, and Bologna. As well as the towns of Modena, Reggio Emilia, and Parma. The town of Piacenza is the end of this Decumanus Maximus. For sure, even in this region the Roman Empire centuriation exists till our time.

The Roman Empire centuriation in the north-east of Padua

And now let’s see an area that preserves the Roman Empire centuriation till our time. In the detail, we are in the Northeast of Italy, in the Veneto region. In particular, in the northeast of Padua, that now is one of the most important art cities of Italy. As a result, this town (Patavium) was already a Roman colony. Hence there was an intensive cultivation around this place. For this reason, the center of the city (Umbilicus Urbis) could not coincide with the surrounding land (Umbilicus Agri). As a result, they moved the Umbilicus out of the city. Most of all, in a position as more as possible barycentric to the area of the centuriation. Hence linked to it by the Cardo Maximus of the Centuria itself.

Therefore, the place falls into the village of St Giorgio delle Pertiche. Here we find two important Roman roads. The ancient Via Aurelia as a Cardo Maximus and the Via Desman, as the Decumanus Maximus. The Decumans are inclined, compared to the ideal east-west direction, about 14,5 °. To follow the slopes of the highest point of the terrain and favor the drainage of water. And also to ensure the durability and integrity of the works. As well as the cardines deviate from the same small amount by the ideal north-south direction. Which allows the cultivated soils to receive the best distribution of the light from the sun.

In addition to the road, they also regulated and developed the water network. Which it is indispensable both for the maintenance of the works already done. As well as for the normal agriculture practice.

The inner structure of the centuriations

In this landscape, the inner structure of the Centuria differs from the ideal one. Because they are not ten, but eight transverse bands. Which they have a width of 2,5 actus (88,80 m). The transverse lines that divide it into the four parts are generally made up of ditches. Most of the time, we find the willow trees along the ditches. And also, the headlands are on both sides. Looking the fields, other lines are in between the previous ones. In fact, they further subdivide the Centuria in a transverse way. They consist of a small ruts that serve also for the drainage of rainwater.

The harder is the determination of the longitudinal bands. Because the south-north direction lines have undergone a much greater alteration over time than the transversal ones. However, the most trusted hypothesis is that they divided the Centuria into 20 longitudinal bands. The width of 1 actus (35,52 m), and then in 160 plots or fields. With a surface of 1,25 jugers (3154 sqm). The longitudinal lines that divide the Centuria into four equal parts are usually tree-lined ditches (alder, oak, plane-tree, poplar, maple, …). While the other lines that delimit the fields, always in the south-north direction, consist of ruts and rows of vines (“planted”).

The fields have a characteristic transversal convex slope. Very useful for the cultivation of the territory under consideration. Made largely of sandy-lime and clayey soils of difficult drainage. In fact, it guarantees the availability of a real soil mattress. That, for a depth of 30-40 cm, can absorb atmospheric precipitation up to 50% of its volume. And it allows with its inclination the regular flow of the water. 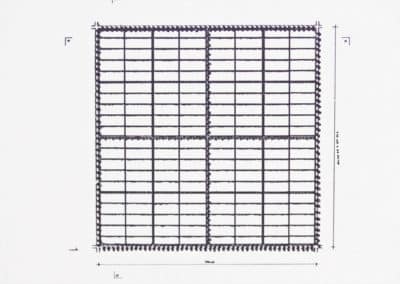 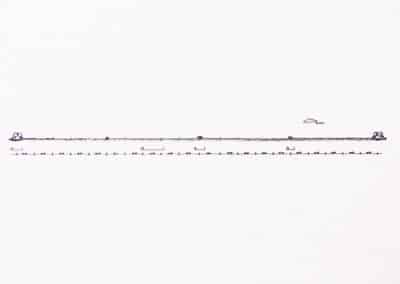 East-West section of a centuria 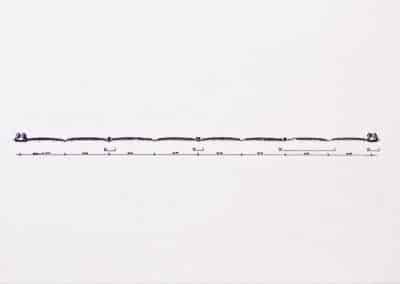 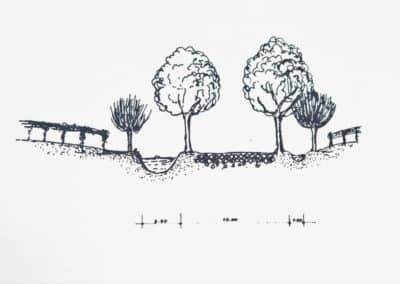 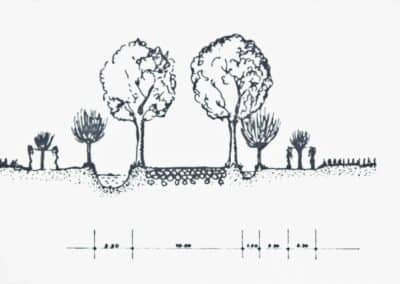 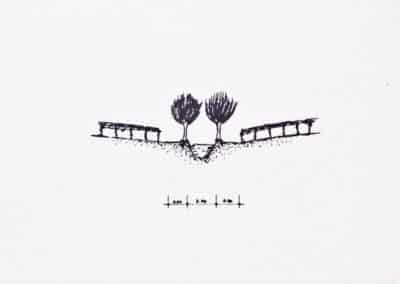 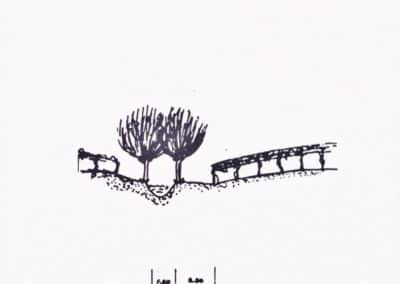 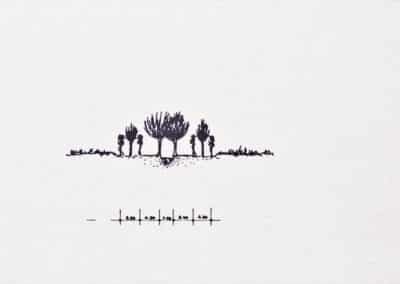 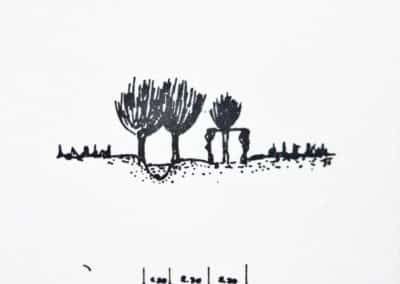 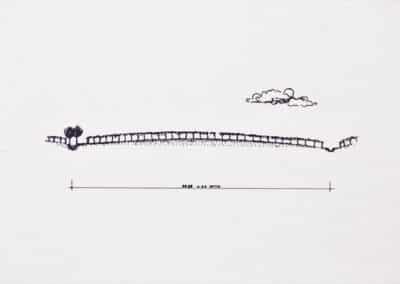 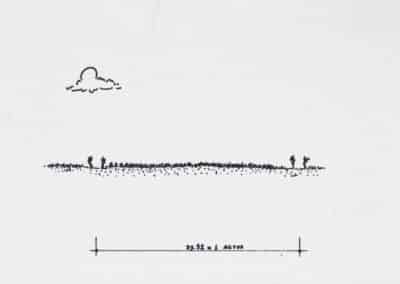 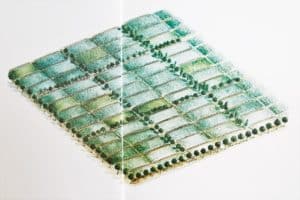 Axonometric drawing of a portion of a roman empire centuriation

Assonometry of a portion of the Centuria (see photo)

The drawing gives an image of how the typical landscape of the Centuria appeared in the area of Padua, northeast of Italy. As a result, a regular succession of fields characterized it. Hence plantings, headlands, and tree-lined ditches bordered these fields.

An interesting museum of the Roman Centuriation has been set up at the civic center of Borgoricco, a building commissioned by the famous Italian architect of the twentieth century Aldo Rossi. It is located within a Roman Centuriation of which large part of the north-eastern territory of Padua is characterized. Since 2009 this rich testimony is accessible to the public thanks to the scientific director Dr. Silvia Cipriano and to the Borgoricco Municipality chief culture officer Mrs Vanna Agostini.

Most of the information and images that are in this post were found in the Italian book entitled “La Centuriazione Compiuta” by the engineer Loris Vedovato and the architect Marino Zancanella (Santa Maria di Sala Municipal Library – August 1981).