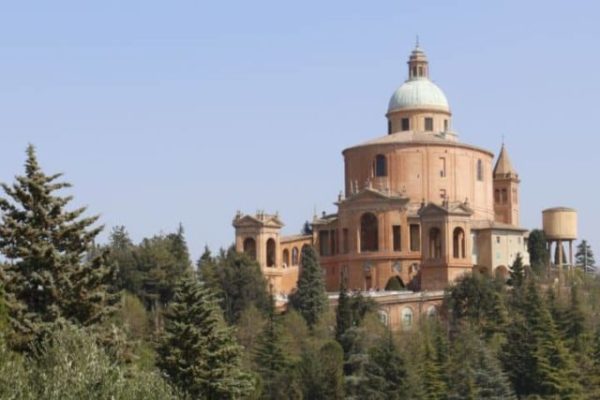 The Sanctuary of the Blessed Virgin of Saint Luke

Saint Luke Sanctuary is an important religious site of the city of Bologna, located along the Via Emilia roman road in Emilia Romagna region. It stands atop a forested hill, the “Colle della Guardia”, and dates back to the twelfth century, in the Middle Age. In 1433 the church of the Madonna of Saint Luke became the destination of processions. And for this reason, they enlarged it in 1481. The inside of the sanctuary is in Greek cross, and the high altar preserves a Byzantine icon. The Madonna and Child, which attracts from the twelfth century a lot of followers.

However, the tradition attributes it to Luke the evangelist. It seems that a greek pilgrim brought the icon from Constantinople to Bologna. Therefore, each year, the icon is shown in the metropolitan church of San Pietro. And from here they move with the icon of the Virgin in procession to the sanctuary of Saint Luke. This event takes place in one of the three days before Ascension.

The construction of the portico

In 1674, they started the construction of the famous portico. The longest in the world with its 3.5 kilometers (12454 ft), 666 arches, and a vertical drop of over 200 mt. The structure of The “Arco del Meloncello” welds the portico in the flat area with the one along the hill. It’s a work by Carlo Francesco Dotti of the 1732. As well as the present church with its elliptical shape that dates back to the 1723-57. 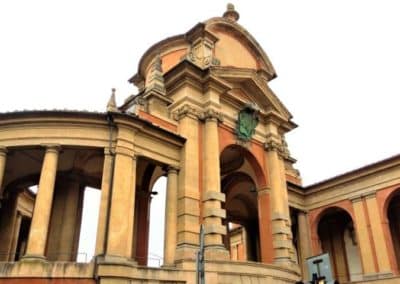 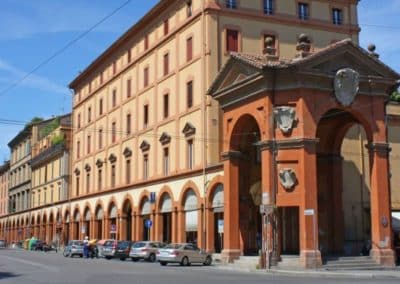 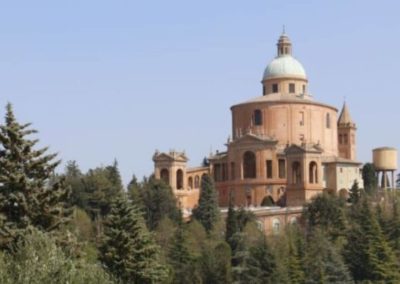 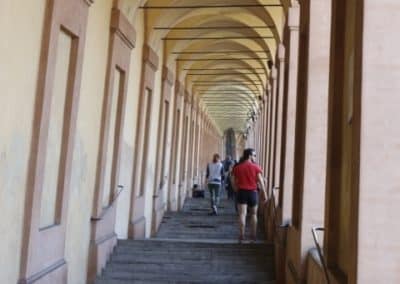 The portico is unique worldwide for its length of almost four kilometers (3796 m). First of all, connects the Sanctuary to the city. Hence it facilitates the procession that every year since 1433 brings the Byzantine Madonna and Child to the church. A procession that takes place during the week of the Ascension. However, a fundraiser attended by citizens of Bologna financed the construction works. As a result, the arcades connect, without interruption, the gate of Saragozza to the top of the Colle della Guardia. Its realization started in 1674 with the construction of the arch of Bonacorsi, at the Saragozza gate. Worth a mention, the architect was Gian Giacomo Monti.

From the flat land to the hill

And this architect makes the final project of the first portico. In the detail, the one built in the flat area. As a result, it is a portico made with sobriety and simplicity. As follow, Carlo Francesco Dotti takes it back from the second decade of the ‘700. Dotti also designed the last part of the hilly side. Which it is characterized by the dynamic variation of visual and vanishing points. Until the final vision of the Sanctuary.

The arch of the Meloncello along Saragozza street emphasizes the start of the climb. The work is of the architect Carlo Francesco Dotti. And it seems that the designer Francesco Bibiena assisted him. As a result, a baroque style building where both pedestrian and vehicle traffic moves undisturbed.

Carlo Francesco Dotti built the present church between 1723 and 1757. As a replacement of a previous fifteenth century building. While his son Giovanni Giacomo completed the two outside tribunes in 1774. In accordance with the Bolognese tradition, the outside structure looks devoid of any emphatic decorations. In fact, the simplicity characterized the curved profile on which the dome is set. Within an elliptical floor plan, the interior spaces dilate a Greek cross. It Culminates with the high altar that stands before the chapel of the Virgin.

Among the artists whose works decorate the church, there is a painting of Guido Reni in the third altar on the right. As well as works of Donato Creti in the second chapel on the right and of Giuseppe Mazza for the chapel of St Anthony of Padua. We also find a painting of Guercino in the main vestry.

The symbol of Bologna

The Sanctuary, located on the hill with stunning views on the Po valley and the Apennine mountain, is the destination of pilgrimages connected to the devotion of the Beata Vergine of San Luca. So as a comforting visual landing place for the Bolognese people that return in the city. The Sanctuary placed on the “Colle della Guardia” is one of the symbols of Bologna.

You can reach the sanctuary of the Madonna di San Luca in different ways. By car, you can take the road that is beside the portico till the church. Or you can use the “San Luca Express”, a tourist line linking the center of Bologna and the Basilica of San Luca. But, in my opinion, the best way is to walk, starting from the gate of Saragozza. Obviously, with this solution, it is strongly recommended comfortable clothing! Keep with you a bottle of water and proceed calmly. With no rush, the climb takes about 1 hour and 30 minutes.

A place to visit!